We met Carol Johnson at our first “Springtime in the Ozarks” Travato get together last year. We were purposely trying to get Travato Owners out of their comfort zone, by dry camping at the Primitive Richland Creek Campground in the Wilderness where there are no hook ups or facilities. It was Carols first trip in her Travato, and initially she did not seem very happy about traveling down the 30 miles of twisty roads into the Ozarks, and then the 10 miles of dirt road to get down to the campground. We had record rains that weekend and the trails we planned to hike turned muddy and all but impassable. Some of the trails required creek crossings (and the creeks had turned into raging rivers, so that was out of the question).
Turns out, as time passed, Carol was a real trooper and really enjoyed herself. Her smile seemed to get bigger as the weekend wore on, and we made another great Travato friend.

At one point, we decided we had no choice but to vacate the campground that was down in the Valley as the creeks were swelling, roads were washing out, etc. and it just didn’t seem safe to stay. As we all took off up the mountain, the rangers were on their way down to kick us out of the campground anyway (because of the impending flooding).
I snapped this picture of Carol driving over a low water bridge. 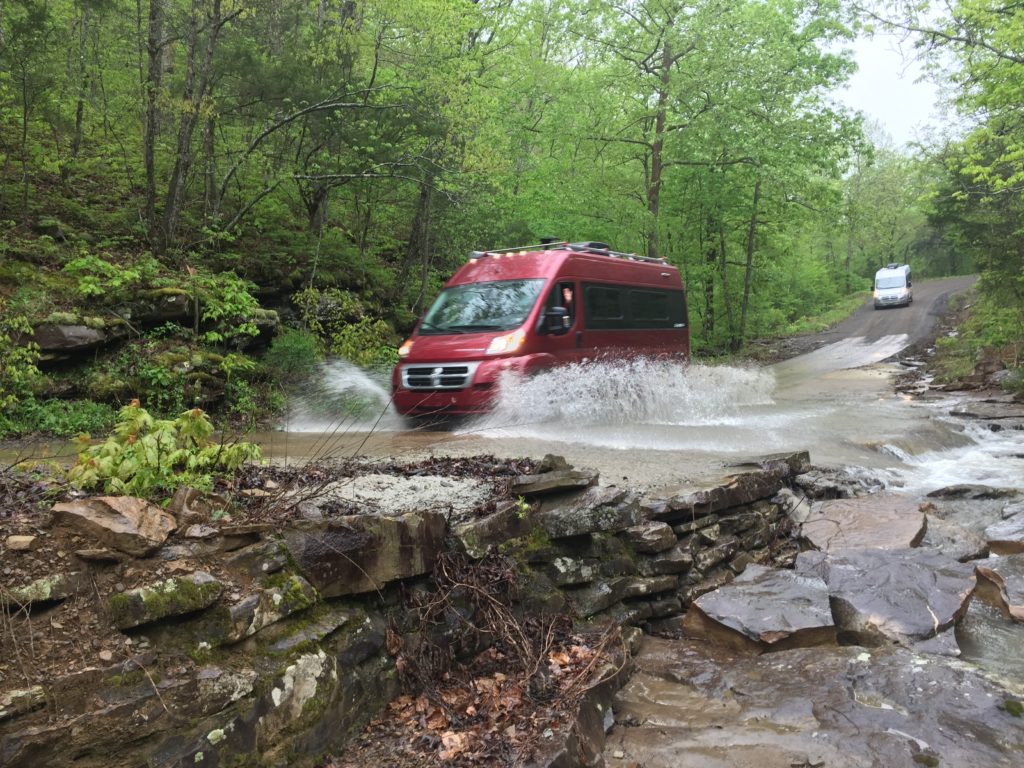 Later, Carol asked me if I would paint a picture of it. I didn’t like the composition of the original photo (with the Van smack dab in the middle), so I took another one of my photos and made a collage. 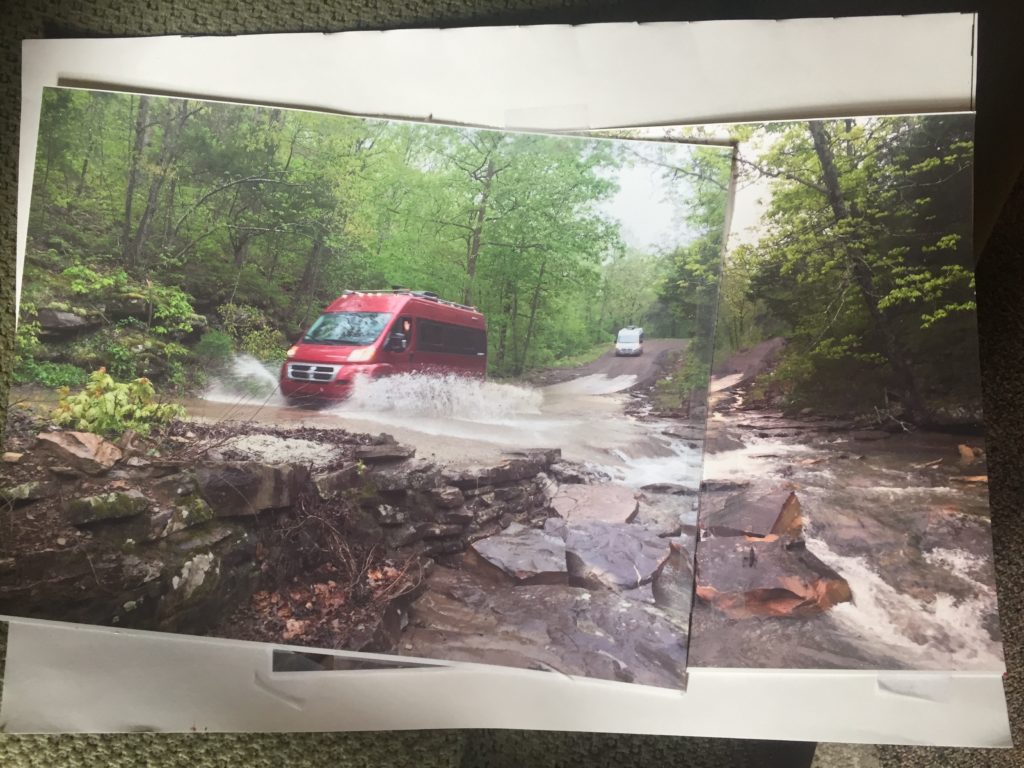 Then I snapped a photo of that, and stitched them together to get my reference for the painting. I liked the way the Van was off set, and the water made a bit of an S shape leading in to the background. 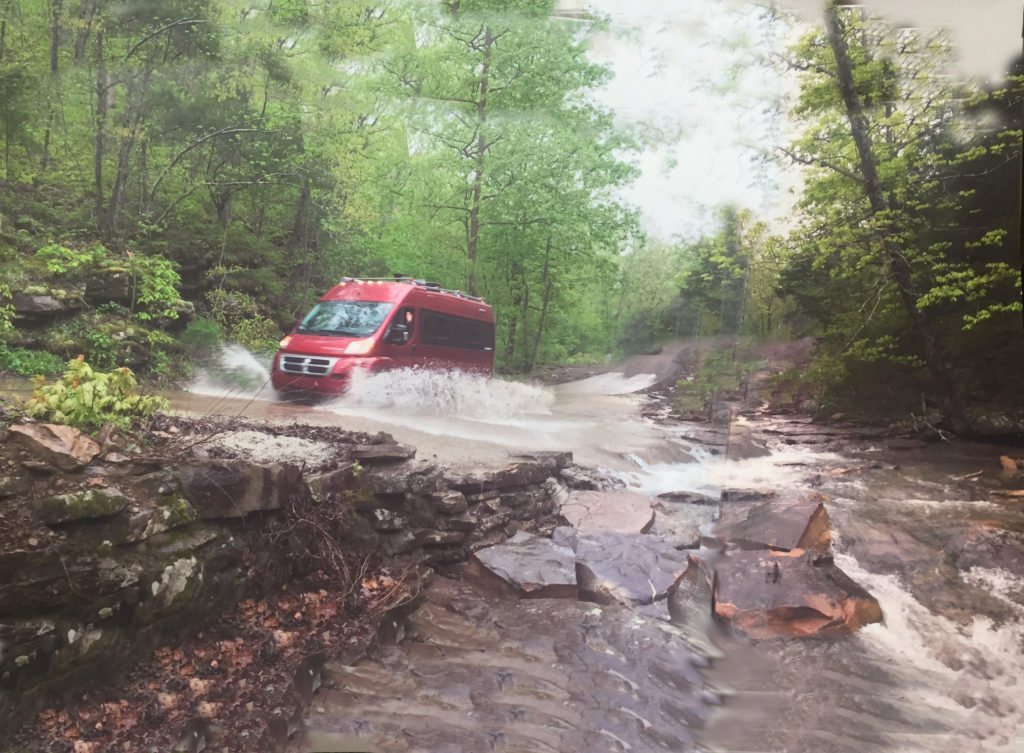 Since Carol turned out to be such a colorful character, I wanted the painting to have a little pop, so I first painted the blank canvas a bright red/orange. 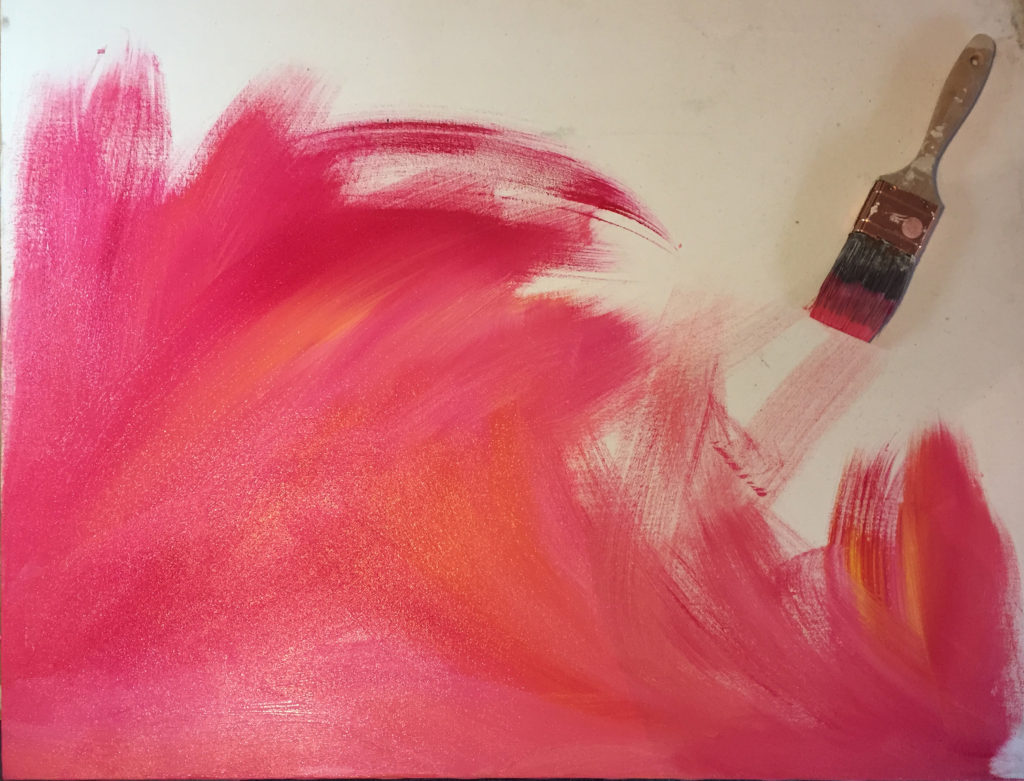 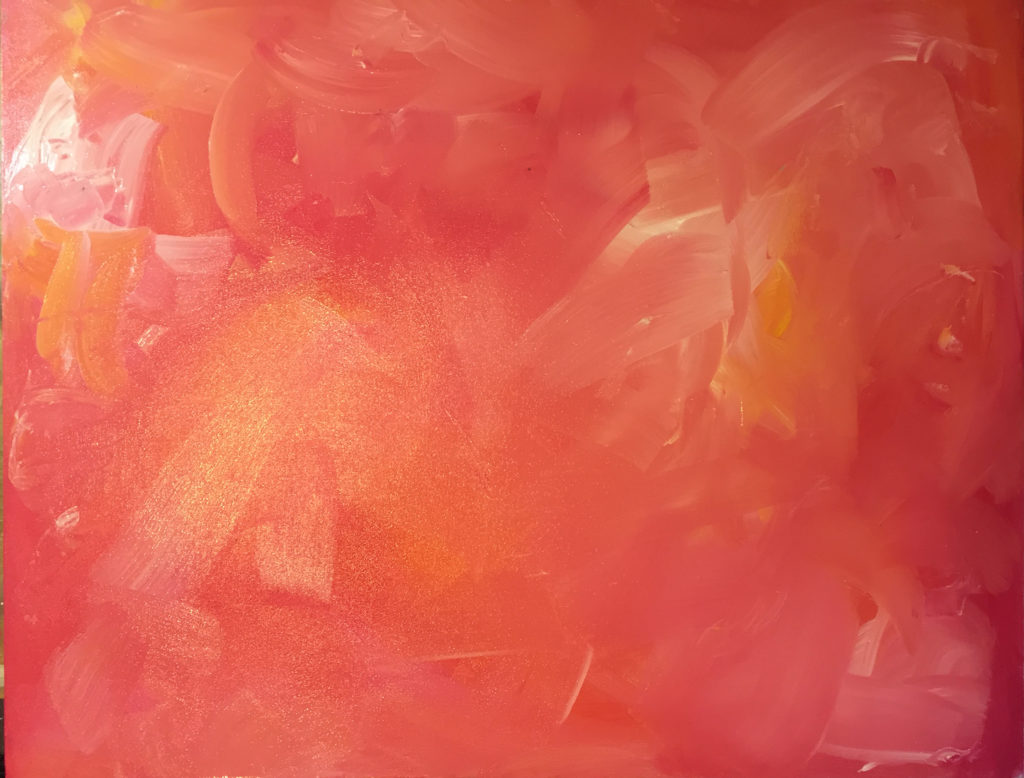 …and since the foreground was going to rough and rocky, I added some texture to the canvas.. 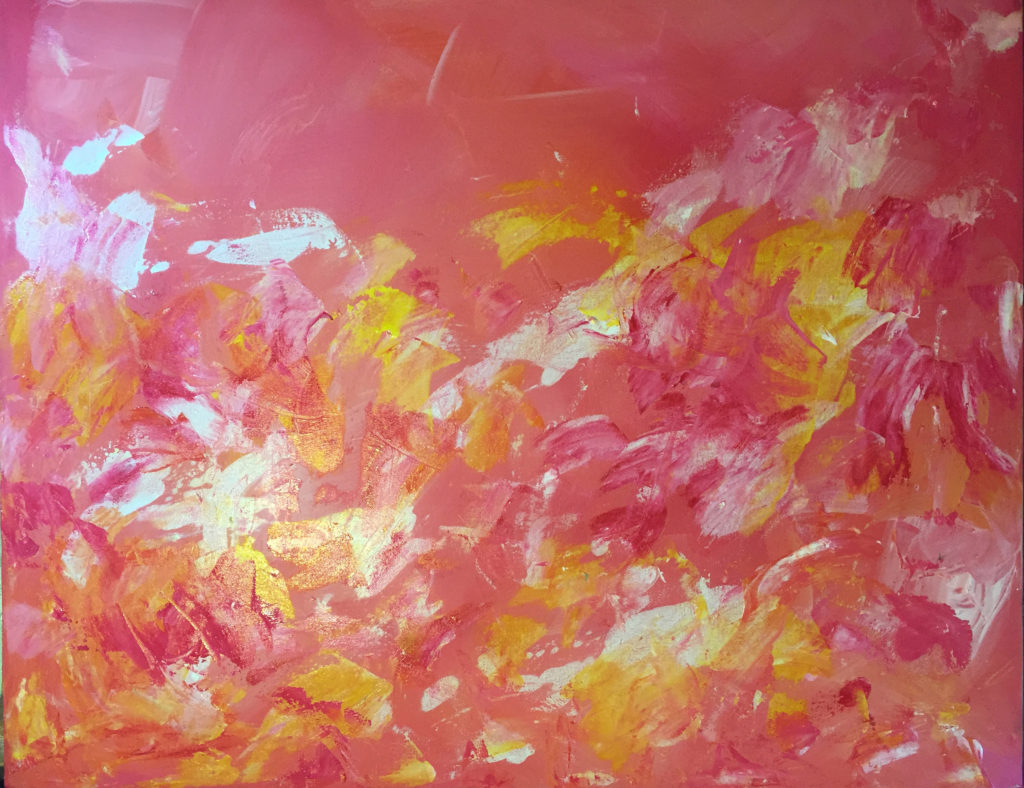 The colors were a bit TOO bright, so I toned them down a bit (picking up the variations of the texture). 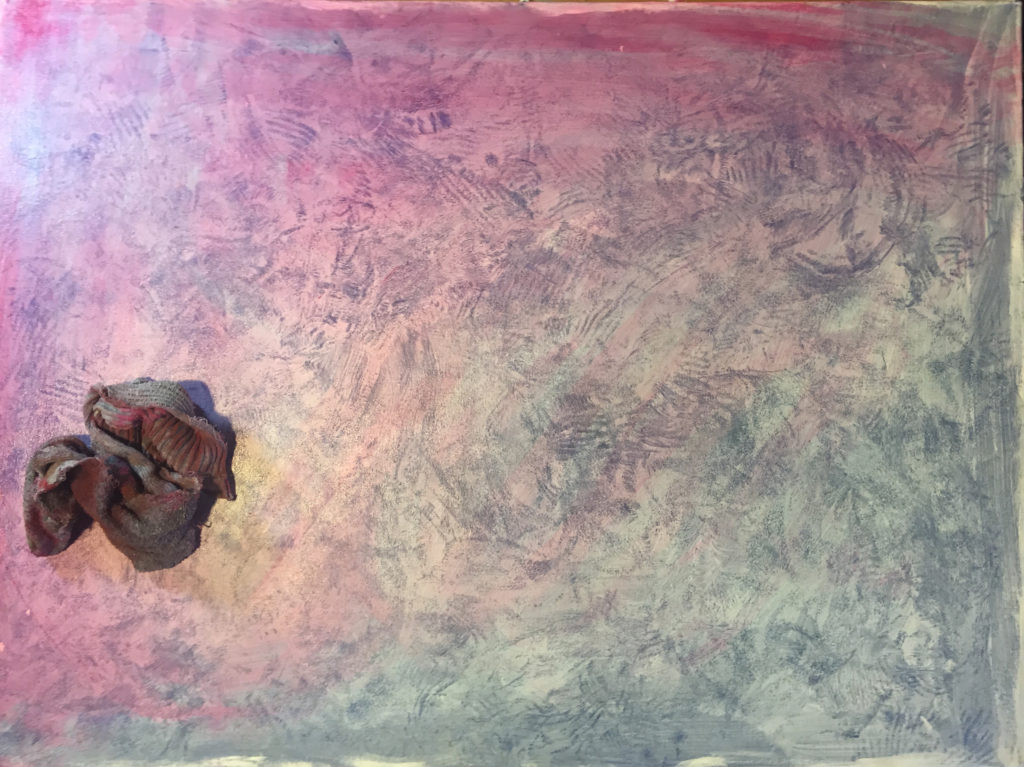 And then brightened them again with complimentary colors. 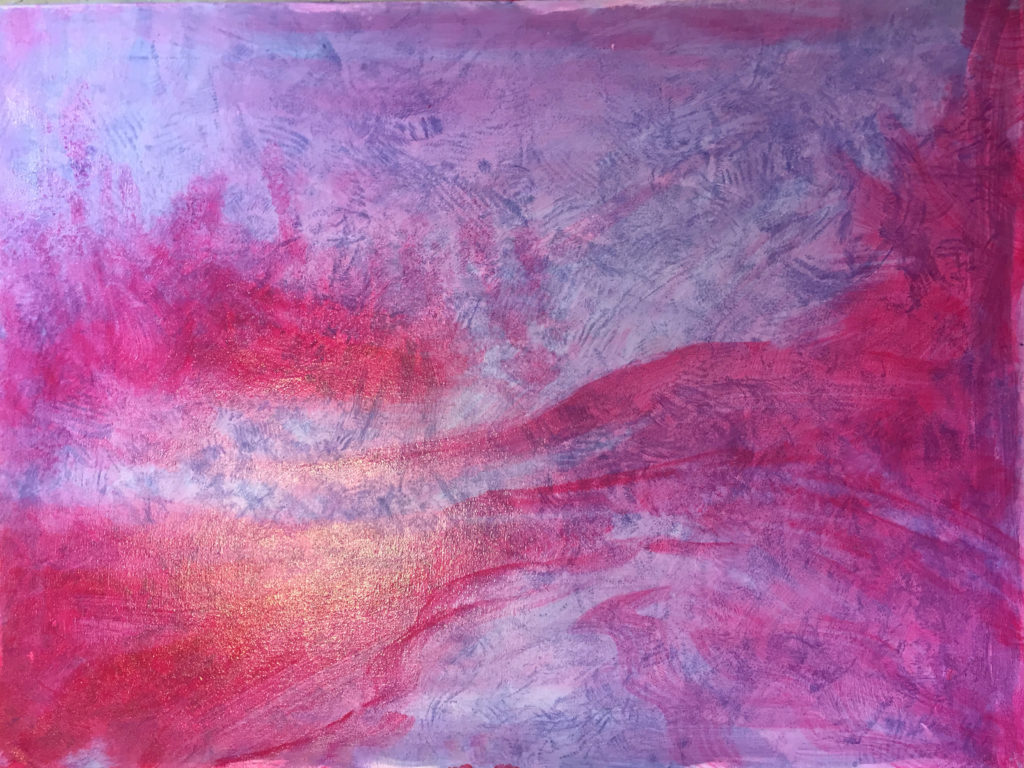 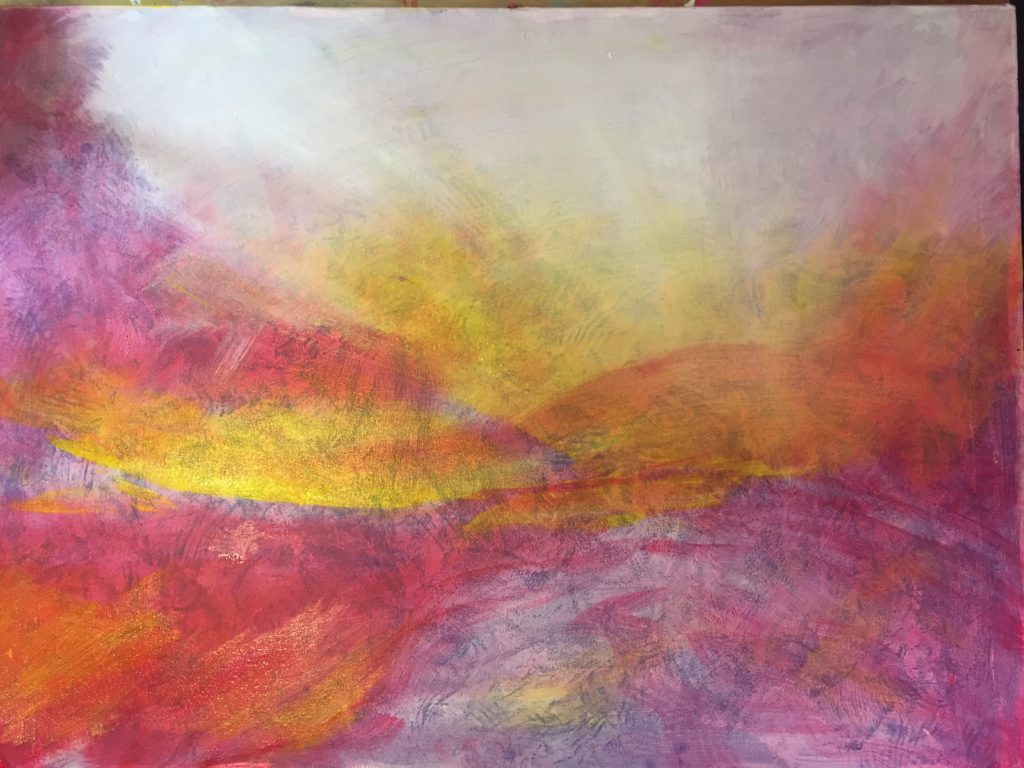 And I started working on the sky. (which was dull and washed out in the photo) 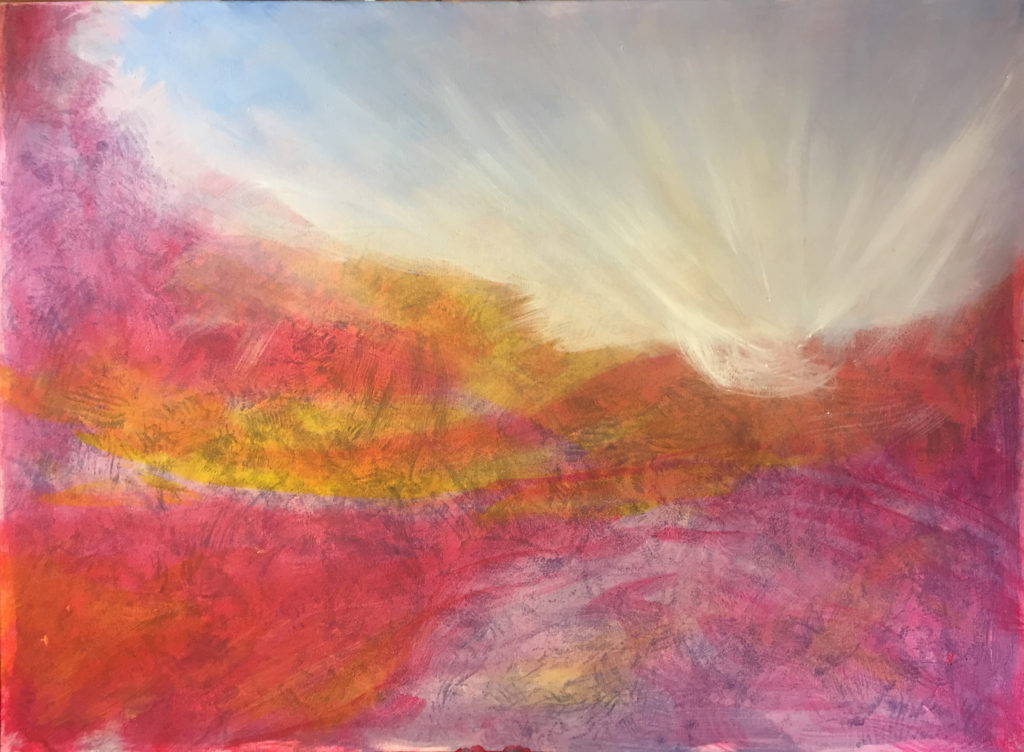 Laying in the background trees… 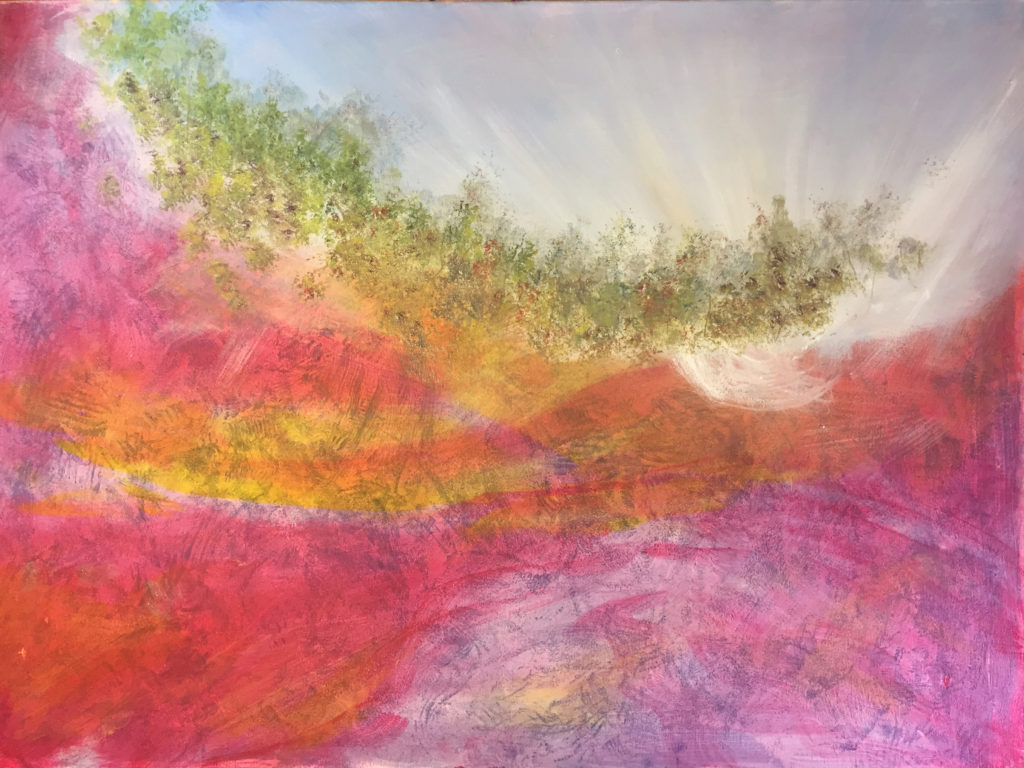 And adding some Value.. 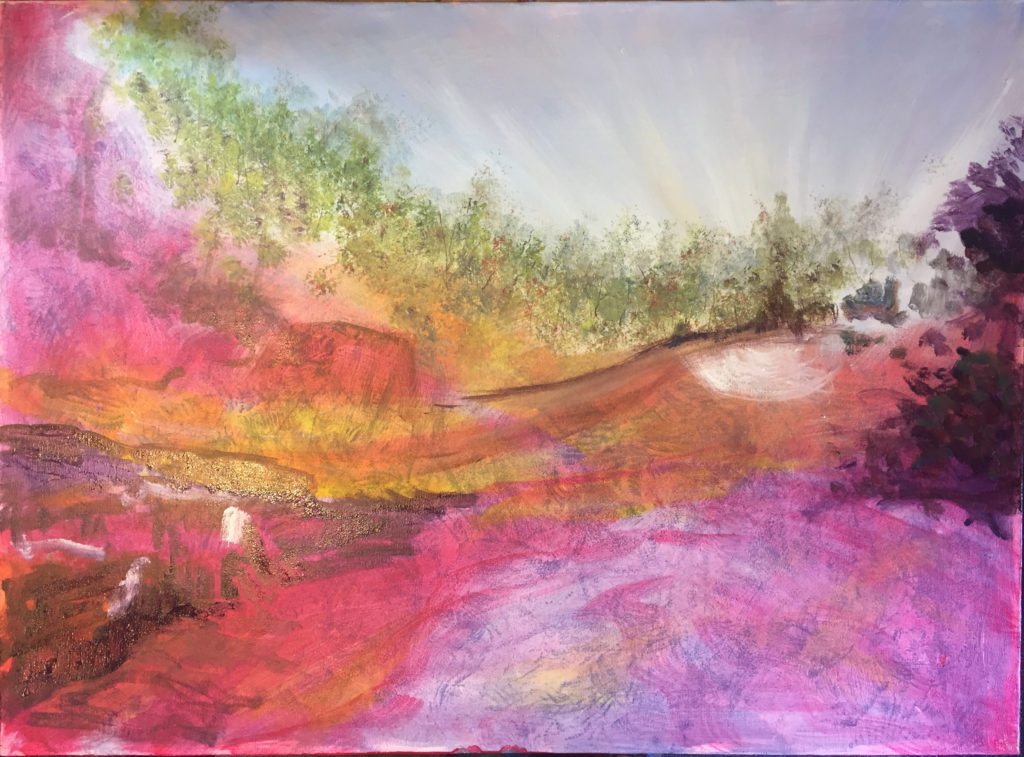 Blocking in the foreground 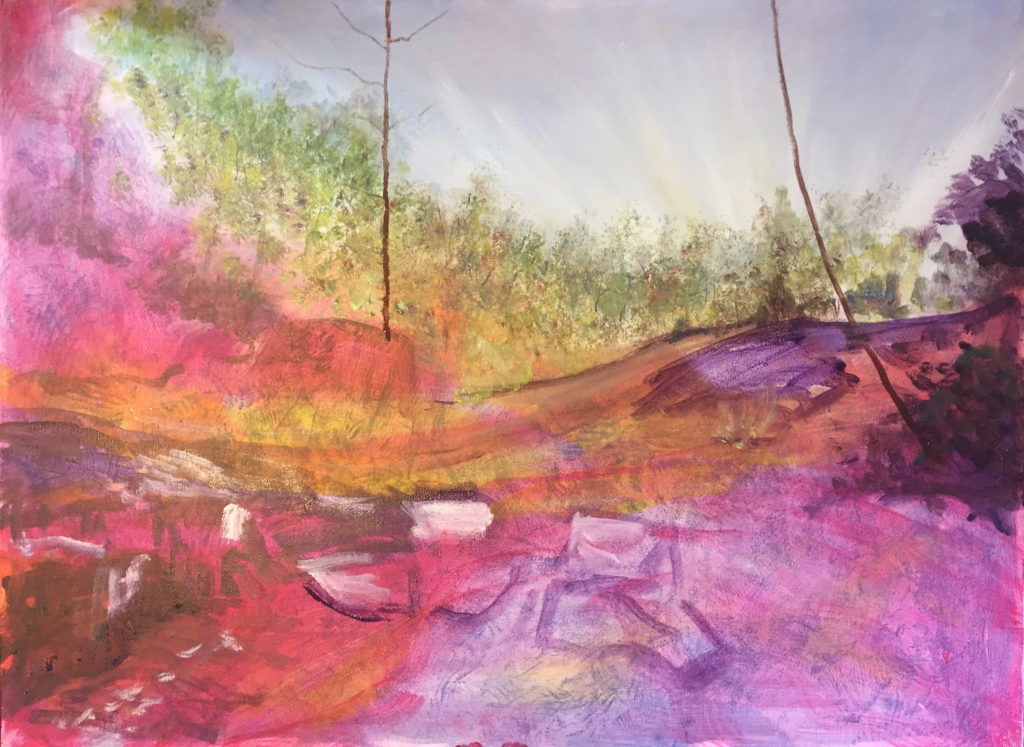 And adding some detail to the background… 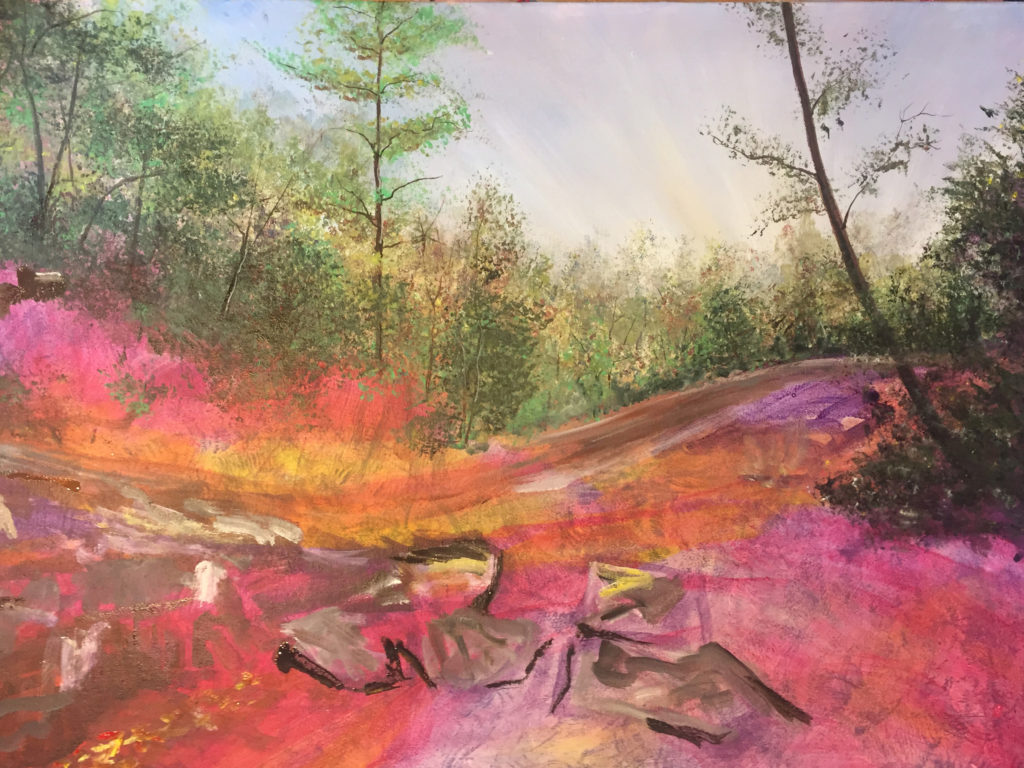 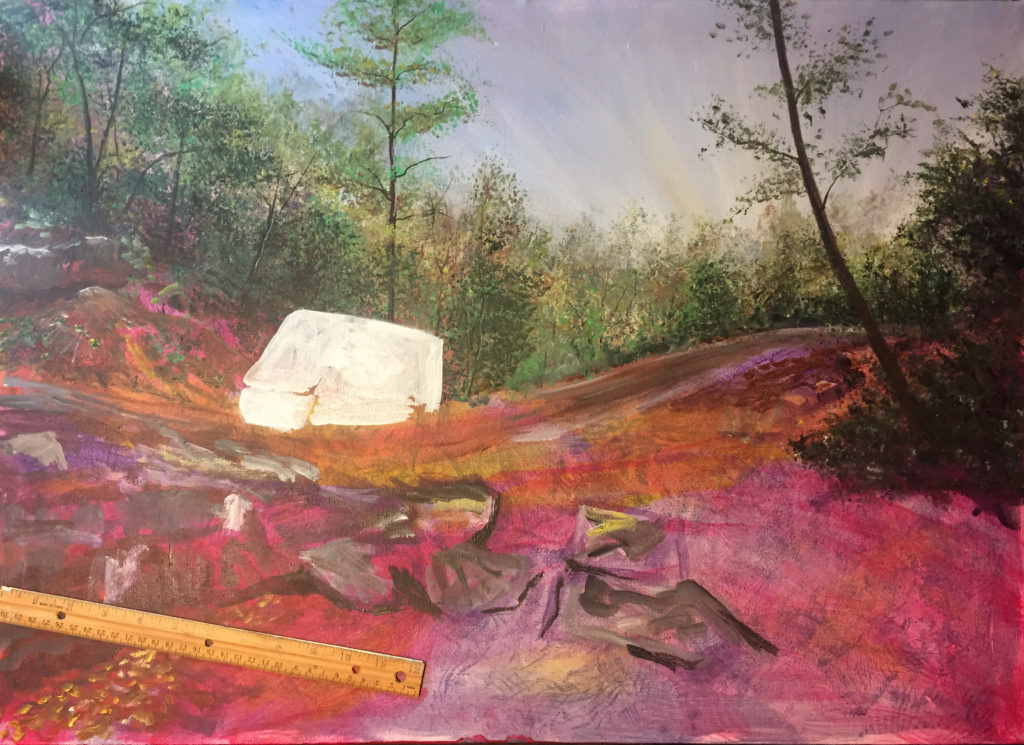 And a little more detail… 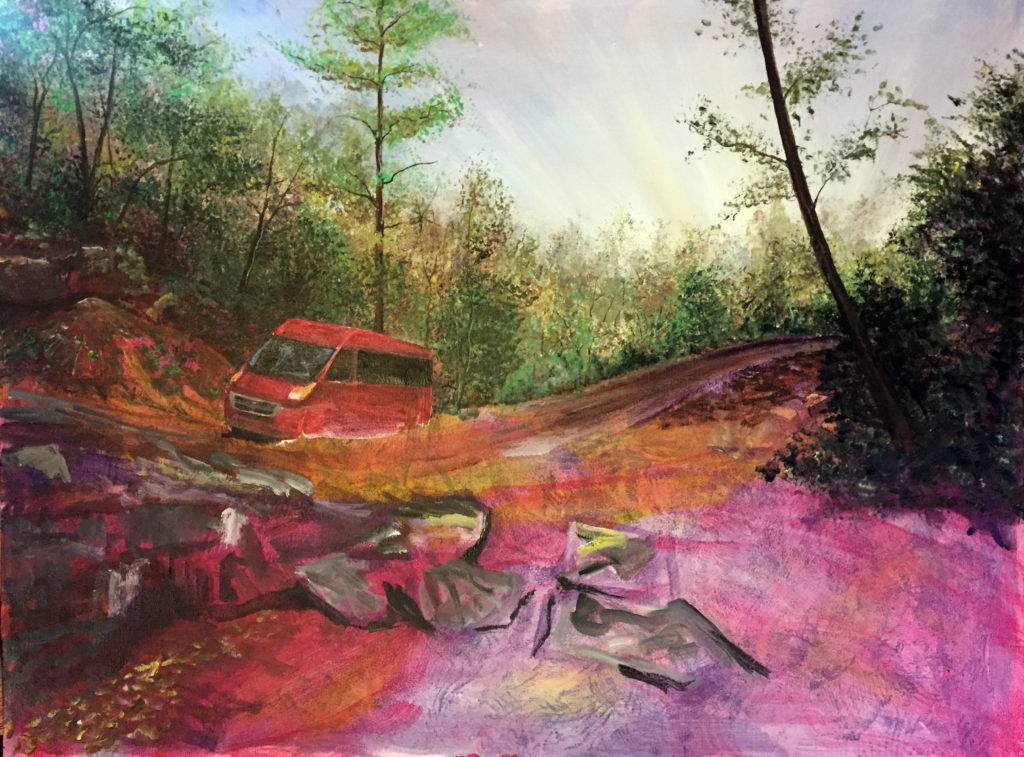 Laying in the colors of the water.. 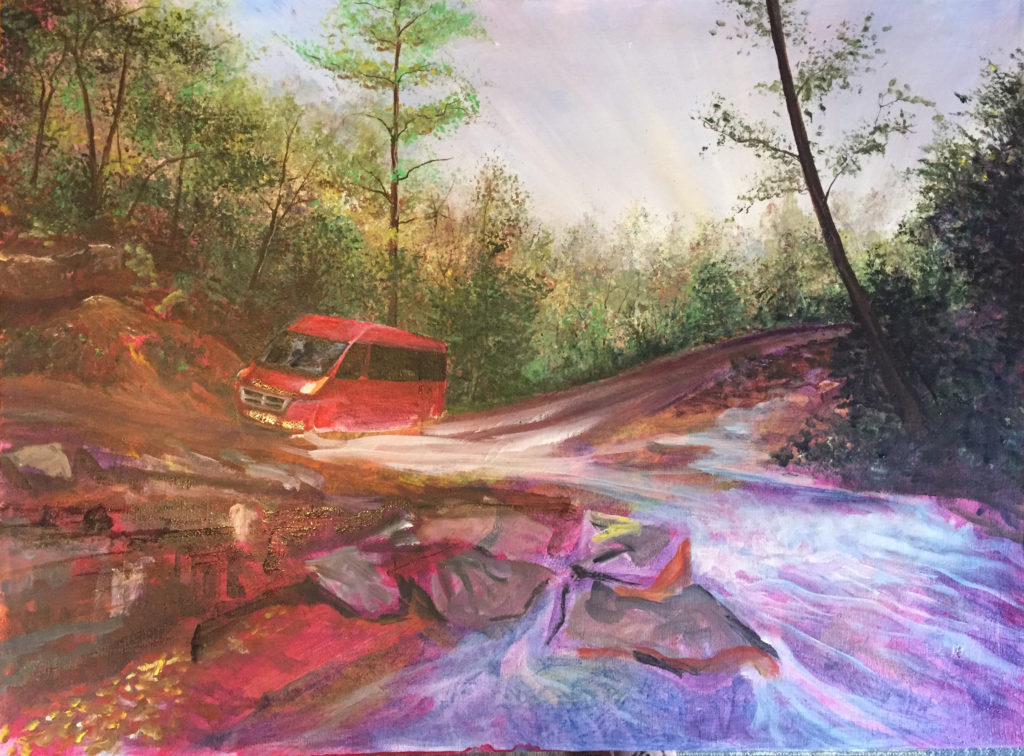 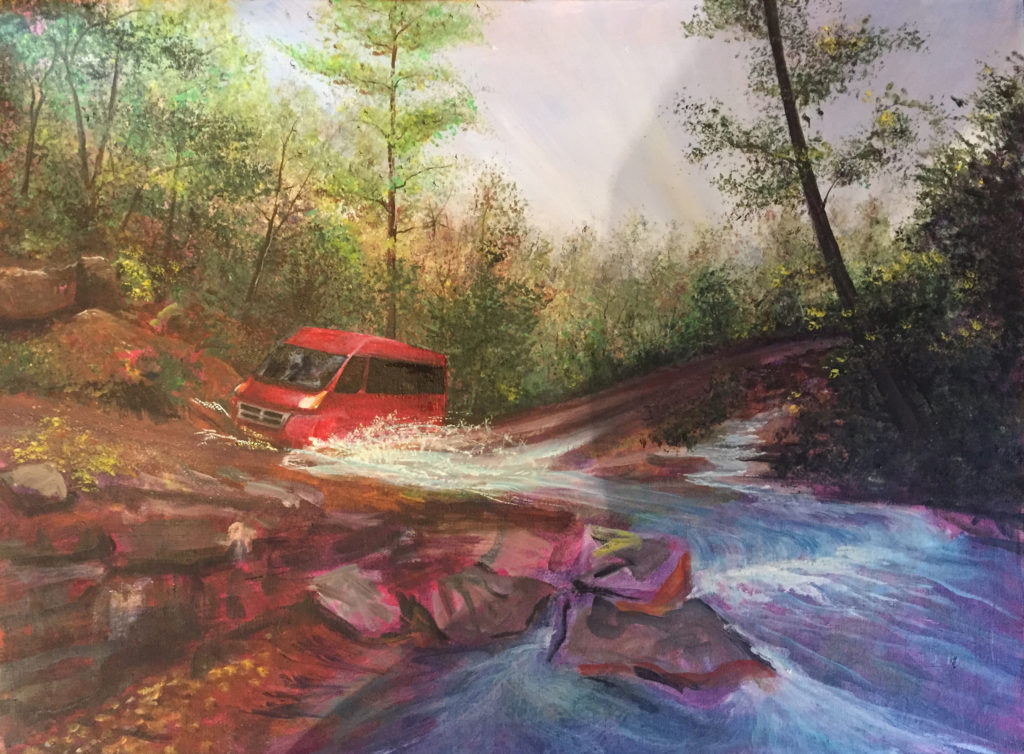 Starting on the foreground rocks.. 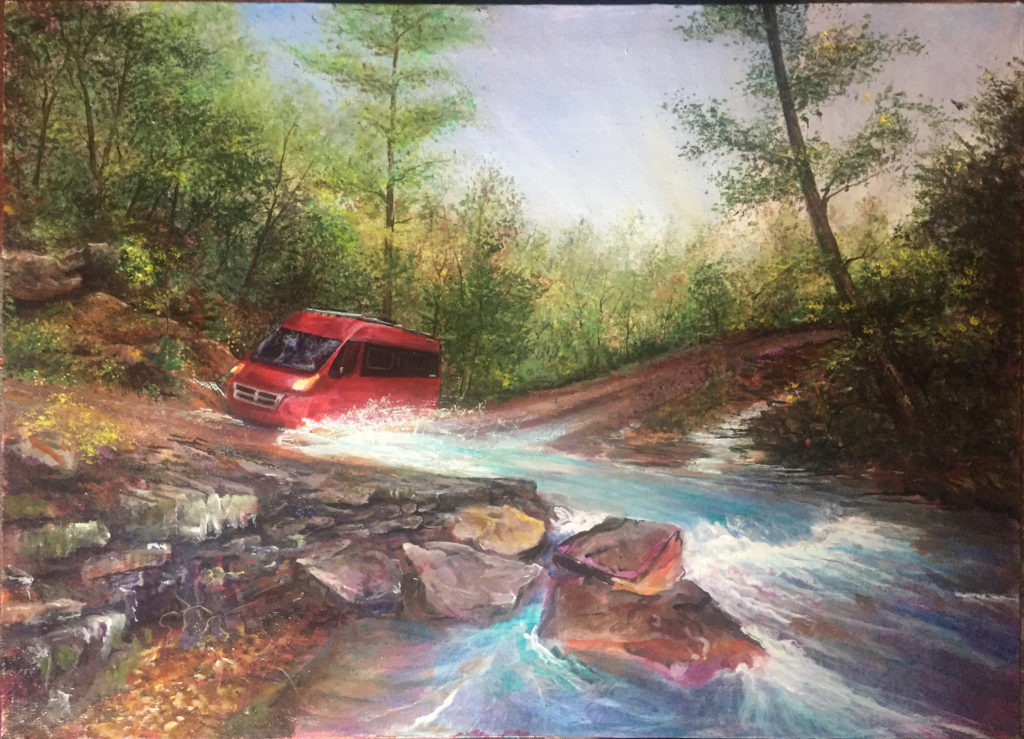 Built a frame …and finished. 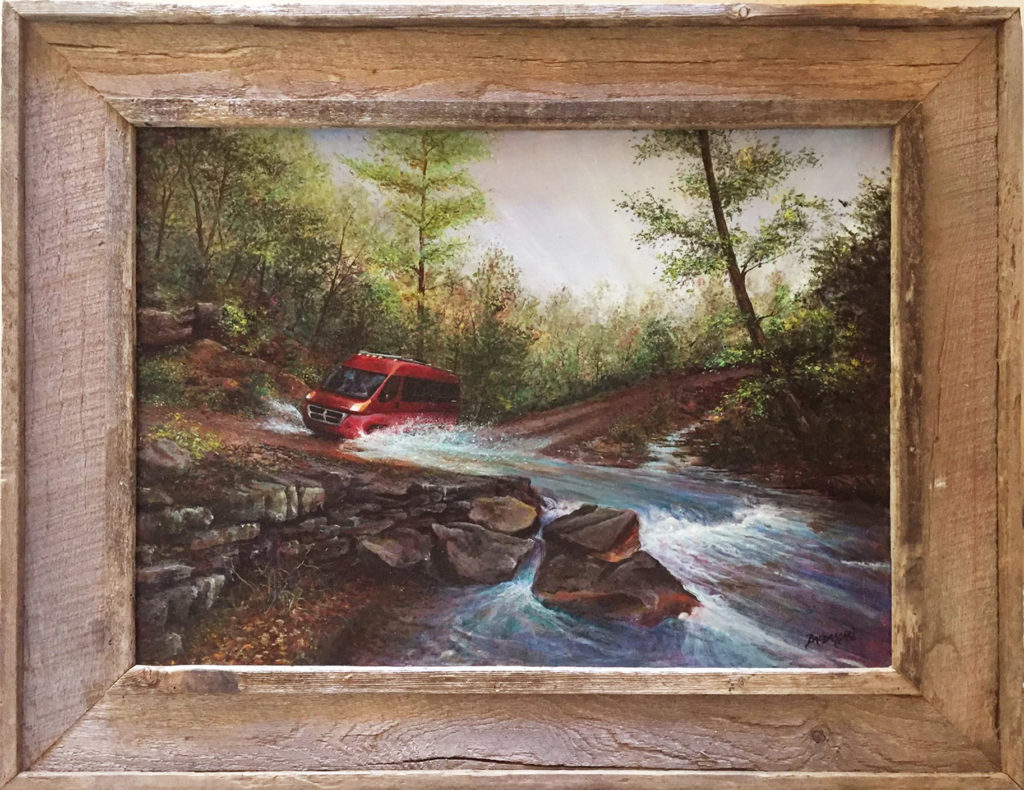 This painting now hangs in her home in Pennsylvania.